Choose Kindness Message Dialog Display Update Message
The maximum number of products that can be compared is 4. Please refine your selection.

Your session is about to timeout due to inactivity. Click OK to extend your time for an additional 0 minutes.
[POP_SaveBagImage] 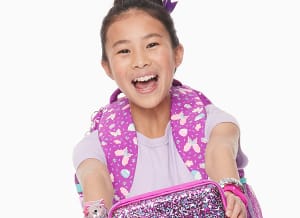 Save time, save your bag!

Off somewhere else? We can email your shopping bag to you, so you can shop these goodies later!

We're thrilled to announce that we're partnering with two leading children charities across the UK and Ireland to help create smiles and giggles for those children who need it most!

We're donating £65,000 worth of products to both Rainbow Trust and Temple Street Foundation, which will be made into goody bags and then distributed amongst the children who are in the care of both the charities.

We want our fans to get involved in this too!

We're asking our customers (parents and fans alike) to write a kind note to the seriously ill children and family members who are a part of both of the charities communities, to go alongside the goody bags to help give them a reason to smile and giggle! Visit any of our stores or download and make your note at home, then drop it into your closest Smiggle store for kids who need it most.

When serious illness affects a child, family life is turned upside down and time becomes more precious than ever. Rainbow Trust pairs each family with a dedicated expert Family Support Worker to help them face and make the most of each new day.

Their team of Family Support Workers provide a life line to the whole family including parents, carers, the unwell child, brothers, sisters and grandparents. Their support is hugely varied and depends on the needs of the family; helping organise appointments, explaining illnesses and treatments, looking after siblings, maintaining school attendance, respite support, cooking meals, bereavement support - this list goes on!

Rainbow Trusts Family support workers allow families to have more time to spend with their family doing what they feel is most important when that time may be limited and even more precious.

Click here to make a donation to support Rainbow Trust Poppy was two when she was diagnosed with leukaemia on Valentine's Day 2017.

"From around her birthday in November, she had gone from being a child I couldn't keep in the pushchair, who wanted to explore and was very lively to being a child who just wanted to sit under a duvet and watch DVDs," remembers Vicky.

Blood tests revealed an abnormality in Poppy's blood and she was rushed to hospital. "That night was awful," says Vicky. Once in the hospital nurses and doctors tried to put a cannula in her arm to start treatment but she screamed and kicked out as she was terrified and looked to Simon and I to make the hurting stop."

She was transferred to Great Ormond Street Hospital the next day, "We were shown into a room on the oncology ward. I unfolded my bed and I knew it was bad. Doctors came in and told me that they had found leukaemia in Poppy's blood and they'd be starting chemotherapy that day," says Vicky, "My head was screaming but I had to focus and listen to what doctors were telling me."

Treatment started immediately and Poppy was in hospital for weeks, she barely moved and when she was finally discharged, she couldn't walk. "She'd spent so long in bed not using her muscles that they'd wasted away and she'd forgotten how to walk. We did physio with her in hospital and at home. I borrowed a baby walker from a friend and she used it like a Zimmer frame - she was so proud of herself when she could actually move around again," said Vicky.

"We saw her determination that day and knew she was going to fight this every step of the way. While trying to adjust to the weekly visits to Great Ormond Street Hospital, we caught cabs to and from the hospital - it cost £130 for each round trip. I started looking around to see if I could access any emotional support for myself, Simon and Mia as I could see she was struggling too. I'd been away from her for seven weeks; Simon was dropping her off at someone's house for breakfast as he had just started a new job and I was with Poppy. After a few weeks, the novelty of being with different people had worn off and she just wanted her family back together again. Our social worker put us in touch with Rainbow Trust Children's Charity and Nicki started visiting soon after."

Having Nicki to help made life so much easier - it didn't take long to feel comfortable with her, Poppy adores her - we all love having her here. The days that Nicki takes us to the hospital, Poppy feels less stressed, I am calmer and I know I can leave her with Nicki and I'm not just leaving her alone in her bed while I go off and try and eat something because Poppy's always nil by mouth and crying out for food."

Poppy's hospital appointments often start at 8am and she and Vicky can be there till six in the evening. Nicki takes the pair up to the hospital and spends the whole day with them. "I pick Poppy and Vicky up at 6am and take them up to London for Poppy's lumbar puncture at 8am. It's a very long day so I stay with them all day. I spend time with Poppy so that Vicky can speak to consultants without having to worry about keeping Poppy occupied. It also means that Vicky can take a break while I sit with Poppy," said Nicki.

"I can't even let myself think about what it'd be like without Nicki's support. She's made our lives so much easier, the girls adore her and I feel so much calmer knowing she is there to help us. She has helped all of us and I'd recommend Rainbow Trust to anyone who needed them," said Vicky.

Sick children need great care right now – and that's why Temple Street Foundation is committed to supporting Temple Street Children's University Hospital so that it can continue to provide world-class medical care to children from all over Ireland.

The Foundation raises funds needed to ensure that these children have access to the very best paediatric equipment, facilities and supports when they need it most. Alicia's Temple Street story began when she was two years old. She was diagnosed with Beckwith Wiedemann Syndrome, which is an overgrowth condition that affects the tongue. Mum Laura says that it was a big relief to finally have an answer after a lot of worry when her beautiful little girl was born.

A few months later, they were referred to the Craniofacial Team in Temple Street, which Laura says was both a nervous and daunting experience. "We met Mr. Murray and the rest of the team – he was so calming, as I was a bag of nerves. He understood the syndrome and I really felt at ease."

Laura says that she didn't sleep the night before Alicia's surgery – it was the first time she had been admitted to hospital. She worried about whether it would work and if her little girl might feel pain afterwards. But she says, their experience of Temple Street was amazing.

"It was essential for Alicia to have this surgery and her stay wasn't going to be long. The nurses on the morning went above and beyond for me. I cried and cried even more bringing her down. I have to be thankful to Kerry who looked after me at Theatre. Everyone was so caring and understanding. The waiting is probably the worst – she is my one and only and it was definitely frightening."

Following the surgery, Alicia was brought to ICU to be monitored. Laura says that their experience in Intensive Care particularly stands out in her mind. "It is here I got to see the absolute courage and care that each nurse had for their patients. Machines beeping, nurses running – it was definitely an experience that I hope I never find myself in with Alicia, but I know if it did happen that she would be in the best care possible."

Thankfully Alicia's surgery is now behind her and Laura says that she can't wait to show Mr. Murray how well she has progressed. "Alicia has a long road ahead – three monthly scans until the age of ten, speech therapy and possibly surgery on her knee. But I definitely wouldn't have any hesitation in attending Temple Street again if she needed surgery. The nurses and doctors there do not get enough credit, and without the Craniofacial Team, my daughter's speech wouldn't have improved. I'll always be grateful for the care she received."

Choose Kindness at home, with your friends or even in the classroom with our free downloadable Kindness activities! Keep in touch with how we're choosing kindness

Add your favourites to cart

Your purchase will be split into 4 payments, payable every 2 weeks

All you need to apply is to have a debit or credit card, to be over 18 years of age, and to be a UK resident.

Late fees and additional eligibility criteria apply. The first payment is due at the time of purchase.
For complete terms visit clearpay.co.uk/terms

You can choose to repay in
10 weekly or 5 fortnightly interest freeee slices.
Your first payment will be due on the day of your purchase.*

Own the way you pay

We pay the store, you get the goods,

nothing to pay today

Choose how you pay us back over time,

*A $6 monthly account fee applies. Pay your balance by the due date (the end of next month) and we'll waive the fee. See full Ts & Cs

Fees and limits vary by plan. You must be over 18, a resident of the country offering Openpay, and meet additional eligibility criteria to qualify. Late fees apply. Your first instalment will be due at the time of purchase. Estimated amounts shown on product pages exclude shipping charges, which are added at checkout. For complete terms visit openpay.com.au/legal